As we sat at the table this morning discussing which hikes to take I was googling the various suggestions. As soon as I said something about a bike trail Jerry said whoa – that was exactly what we were going to do first. We have carried our bikes 3000 miles and have yet to ride them plus we had sort of fallen off of the band wagon at home so I was a bit anxious about a 3 ½ mile ride but first there was work to be done. The bikes had to be readjusted and the chains sprayed. Remember we had bought a cover for them but it only lasted 92 miles so they have been without cover and exposed to the elements the rest of the time. 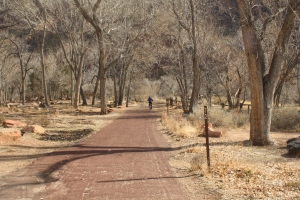 The trailhead for Pa’rus Trail was at the Visitor’s Center so we drove the car down there and unloaded the bikes. Wow, I had forgotten how much I enjoyed bike riding. The weather was perfect, not to hot nor too cold and whenever we got a little warm it seemed a nice breeze floated across us. The trail is an in and out and lots of curves and bridges. We of course stopped along the way and snapped pictures, lots of pictures and continued to the end where we quickly turned around and headed back. We stopped at Diversion Dam and walked down to the river and just sat and enjoyed the scenery. The little waterfall over the dam was so pretty and refreshing.

Back at the coach we had lunch and then Jerry figured out how we could combine three hikes into one which resulted in about 4 miles. We parked the car at Zion Lodge where the trailhead for Lower Emerald Pool Trail was located and began the trek up. It really was not a difficult hike but a bit disappointing at the dry pool. By this time the wind had picked up and the overhead waterfall was blowing water pretty heavily so we scurried through as quickly as we could heading on to Upper Emerald Pool Trail. This was a sandy and rocky trail that climbed to the Upper Emerald Pool and though described as moderate it was actually pretty strenuous at times. The closer we got to the Emerald Pool the rockier it got until we were actually climbing over and around big rocks. The end result was the frozen waterfall at Emerald Pool. We chatted with a family from northern Utah who were there with their four children. One was three and I honestly don’t know how he was able to do the trail. Thank goodness we had our walking sticks because it would have been even more difficult without them.

As we left there and began the climb, yes it was a climb, we diverted and continued onto the Kayenta Trail which led to the Grotto. It was nearly all downhill so was fairly easy although sandy. At one point the ledge got a little narrow but there were chains to hold on to.

At the bottom we continued along the trail from the Grotto to Zion Lodge where our car was parked. I thoroughly enjoyed the hike although I wouldn’t do it again as the end result was not as promising as we’d hoped. In fact, one person we met said “It’s worth it – I guess”.

As we were driving back to the campground Jerry decided to ride into Springdale to get some Tylenol. I don’t think there is a grocery store in Springdale and we couldn’t even find a convenient store. There are lots of B&B’s, hotels and restaurants but that’s about it. In addition the extensive road construction is continuing and driving there is slow.

We came back to the coach, grilled steak and along with a frozen baked potato we had picked up in Louisiana and a salad had a nice dinner.

We had planned to go to Bryce Canyon National Park tomorrow and then spend Saturday back at Zion but when I looked at the weather for Bryce we changed our plans. Tomorrow the high temperature is supposed to be 28 with a wind chill of -5. Think we’ll postpone our trip a day as the weather for Zion is going to be pretty much the same as today assuming the light snow predicted doesn’t turn into a heavier snow.