Since we had plans to go into North Las Vegas for lunch with Jerry’s former employee we decided to get out early and do a little hiking. Our goal was the Fire Wave Trail however on the way up the White Dome Road we missed it and also on the way down. We stopped at the Rainbow Vista trail but were not sure how long it was nor did we know if we had enough time to complete it so we decided to skip it for today and just went by the Visitor’s Center. Neither of us had any clothes for a 70 degree day but Jerry was lucky enough to find a short sleeve t-shirt. Of course, I got a magnet!

We rode around the park first stopping at the petrified logs. Had we not gone to the Petrified Forest earlier in the trip it might have been interesting but as it was I was glad it wasn’t their claim to fame. There was a short loop trail and on that trail were four different wired fences with a log inside. The fences were only four feet long so you can imagine the size of the four logs.

Next we rode the loop by the campground going by the Atlatl Rock and on into the canyon. While we saw some amazing scenery we didn’t stop for anything as we were sort of in a time crunch. We did see some rocks that we would like to have climbed but had no time.

Back to the coach, showers and a change of clothes and off to Vegas we went. We’ve been to Vegas twice before and each time I said that was the last time and here we were going yet again to visit a special friend. Kelly was one of Jerry’s teachers when he was a principal but had moved away some years ago. She was an excellent teacher and Jerry always held her in a special place in his heart so getting to visit her was a treat. She had prepared a delicious lunch for us, taco soup and taco salad. The lunch and the reminiscing were such fun plus we got to meet and visit with her precious son, Eli. Husband Dan was at work. 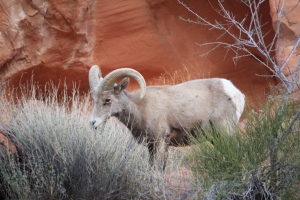 As soon as we got back to the campground we changed into our hiking clothes trying desperately to get in one more hike before leaving. We decided on the Fire Wave which was near the end of the White Dome Road. As we rode along I suddenly yelled “Stop” and nearly gave Jerry a heart attack but he did stop. I had seen some people who had pulled off of the road and were taking pictures so I looked to see what they were seeing and lo and behold, finally, I saw a big horned sheep. In fact there were about 10 of them, a couple of them babies. We got out and took some pictures being careful not to get too close to them.

We headed on to the Fire Wave Trail. The park closes at 5:00 so we knew we didn’t have a lot of time but we started out anyway. Oh my goodness, what an array of colors, 50 shades of ochre and we could climb all over them. The path was fairly well marked, sandy and rocky but easily navigable. We walked until we realized that the sun had set and we needed to turn around if we were to get back to the car before dark. We cut it close as it was not dark but close to it when we got back to the parking lot. When we walked up we saw a guy at the other lone car and he asked if we had seen anyone else on the trail. Actually we had seen a couple of people about ¼ mile in front of us when we turned around. We could tell he was worried although he said several times that he wasn’t. One of the guys on the trail was ex-military and had a full backpack with him but the other guy was according to him “a city guy” with little sense of direction. Although he said we could go on we stayed with him until his friends arrived safely.

Back to the coach for dinner. We have reservations tomorrow at a KOA in Needles, California but will only have 30 amp. I surely do hope it’s not hot because we will only be able to run one air condition. The main reason for going to a full service campground is to wash over a week’s worth of laundry. Hope it all works on 30 amp!