We just couldn’t decide what we wanted to do today. Jerry didn’t want to take a hike that ended in a view just like he had already seen – he wanted something different so we ended up at Legion Lake Trail. It was an absolutely beautiful hike. The sign at the beginning stated it was rated as “Easy”. The newspaper, The Tatanka rated it as “Moderate to Strenuous”. Actually, I thought neither was correct. To me, “Easy” should be flat land that handicapped could access. “Moderate to Strenuous” means hard work. In this case, it was neither one but it was a fun one-mile loop. There was a little beach at the end with some people sunning and kids swimming yelling “it’s cold”! The temperature was supposed to get down to 49 last night so I guess it was cold.

We got in the car and continued our ride to the gift shop where we bought a couple of shirts, one for Jerry and one for me. Because we didn’t know what we were going to do when we left home this morning, we had not brought our usual picnic lunch so we bought a hot dog at the gift shop. It was filling. That’s all I can say! 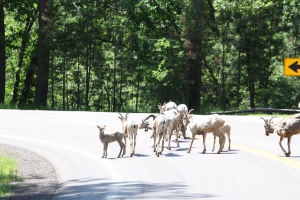 Next, we got caught in a traffic jam – a bighorn sheep traffic jam. They were just standing in the road not paying much attention to anyone. We were only there about five minutes before someone nudged them out of the way however that was not to be our only traffic jam of the day.

We continued our ride through the park and saw some of the most amazing views, rolling hills of green growth topped by the majestic Ponderosa Pines. Kind of made me want to jump out and sing “I go to the hills” from the Sound of Music. It looked just like that final scene in the movie.

Before we knew it, we were on Iron Mountain Road and headed for Mt. Rushmore. We hadn’t intended to go there today but I’m glad we ended up there and didn’t make a special trip. Due to construction the Walk of Flags and the theater are closed leaving only the gift shop and food mart open. We walked in, took some pictures and then ate some ice cream! We took the .2-mile walk to the Sculptor’s Studio and enjoyed talks by two different rangers. Since Jerry didn’t want to make the .4-mile trip up the rest of the Presidential Trail I decided to do it alone. I went about halfway up, decided I could see all I needed to see and then went back down.

After we left we decided to go back to Wildlife Loop and somehow ended up on the Needles Highway AGAIN! Poor Jerry. When we got to the Needles Eye Tunnel we parked, got out and walked around some.

Still headed to the Wildlife Loop we continued on forward. Shortly we saw a car stopped which always indicates animals of some kind. Sure enough, there were a couple of mountain goats on the hillside. Those are the first mountain goats that we’ve seen. That added to our repertoire of animals seen on this trip: chipmunk this morning, pronghorn sheep this afternoon and of course bison.

We finally got to Wildlife Loop and slowly made our way in. We saw one pronghorn sheep and of course the donkeys. We were about to decide that we wouldn’t be seeing any more animals today when suddenly we surrounded by bison! We were definitely in a bison traffic jam. There were bison everywhere, at least a couple of hundred and boy were some of them big! They were so close to the car we could have touched them. I kept my window rolled up! Fortunately, we were going in the right direction because the other direction really had a traffic jam. There were probably a hundred cars waiting and almost certainly some of them had no idea what was causing the problem.

When we finally got through the morass of bison we wound our way through the exit of the park and the eleven miles to Custer. A quick stop at the grocery store and we were headed to the campground with grilling on our minds. Jerry cooked some delicious steaks, and with a baked potato and salad one would think we were at home – and we are, just not in North Carolina. That’s one of the nice things about taking our home with us.